First published on www.facebook.com/breastfeedingtogether as part of the Topic Tuesday series. 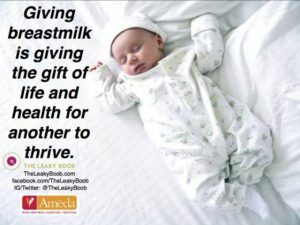 Feeding choices, The World Health Organisation gives us five different feeding choices, when it comes to feeding our babies, and lists them in the order of preference.

Four of these are quite well known.

We’ve got exclusive breastfeeding and expressed breast milk coming in as first and second and a combination of breastmilk and formula milk, and exclusive formula feeding as number 4 and 5.

But then what’s in the middle, what’s number 3?

Ok, so it’s a bit of an obscure one, and not one that’s well known, or really ever considered in our society where we have easy access to formula milk, clean running water and sterilizing equipment.

Yep, the milk from another mum.

So, it’s not just from the mum in the next bed to you in the hospital, but from a human milk bank. Mothers express and donate their breastmilk to the milk bank. It’s treated like blood donation, mums are screened and the milk is sterilised and pasteurised.

We get it, it sounds a bit strange, why would anyone want to feed their baby someone elses breast milk, especially when formula is so readily available and viewed as the norm. But remember, it’s only really seen as odd because it’s from our boobs! Donated milk gets a strange look and questioned in a way that donated blood never really does, but it can actually be as vital to a baby’s survival as blood can be.

Breastfeeding mums can apply to the human milk bank to donate their breastmilk, knowing they are helping these babies.

Other mums may choose to go down a less formal route. ‘Mum to mum’ milk sharing exists, and sites that put mums with extra milk in touch with mums who are in need are only a Google away! This milk isn’t tested or screened and you accept the risk, but for many families the risk of giving untested breast milk that you know another mum is giving to her own baby out weighs the risk of giving formula milk and creating potential allergic sensitisation within the baby’s gut, the risk of over feeding, and not offering baby all the additional antibodies and immunity breast milk gives. Milk sharing can also suit mothers who want to donate just what they’ve got when they’ve got it rather than having to commit to more regulated donation.

Either way, number 3, donor milk can play a big part in many breastfeeding journeys.

Hopefully the more milk donation is talked about the more we can help to normalise it!