First published on www.facebook.com/breastfeedingtogether on 14/04/19 as part of the sharing sunday series. 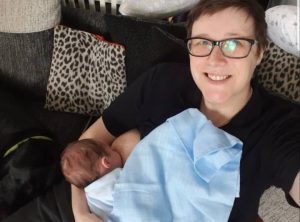 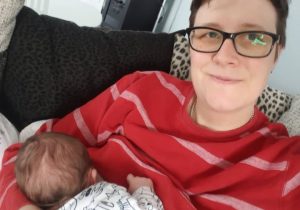 Prior to trying breastfeeding, I never really liked the idea of it to be honest. I never thought it would feel natural. From the beginning, myself and my wife always said I would give breastfeeding a try, but if I didn’t want to or if I couldn’t then we were more than happy to formula feed after those first few feeds of colostrum.
However after his arrival, it becane more important and I became more stubborn, as the times he did latch well, I absolutely loved it and felt so proud that I was directly feeding our son the goodness that comes with breast milk.

I would say our journey started antenatally. I had gestational diabetes and it was suggested by one of the midwives at clinic to collect colostrum, due the benefits of this to help to control the baby’s blood sugars. From week 37 I tried to hand express colostrum. I wasn’t able to express any so my wife got in touch with BFT on Connect and Share for advice. Vikki offered to come out and see us. I declined as I was too embarrassed. How stupid does that seem now, lol?!

Straight from birth our breastfeeding journey was difficult, our little boy Austin couldn’t latch, we tried every two hours and I think every midwife and student had a go at trying to get him to latch in any which position possible. I still wasn’t able to hand express either, so midwives and students alike would express for me, and syringe feed and top up with formula via a cup. Austin had jaundice so we needed to ensure he was feeding well. As syringe and cup feeds are generally given by the midwives rather than parents, my wife and I weren’t able to actually feed our boy ourselves. One of the (many) midwives to try and get Austin to latch noticed I had flat nipples (I never knew that was a thing), so we tried a nipple shield, he would then intermittently latch. We thought this was the road to our successful breastfeeding journey. On around day 5, I started to express with a pump and we would bottle feed the expressed breast milk (EBM), if he wouldn’t latch. It was an amazing feeling that we were finally feeding our son.

Upon returning home, I tried to continue with getting Austin to latch, he would maybe latch 2 or 3 times a day varying in time from a few mins to 55mins. It was getting increasingly difficult for Austin to latch even with the nipple sheilds. He would scream and cry and get himself so worked up each time, and in turn I would get upset. The BFT have been such a support, be it online chat, on the phone and of course the numerous visits I had from them. Sometimes, just having them come out and reassuring me that I was doing a good job, was the best feeling ever, and just what I needed.

As Austin’s demand went up unfortunately my supply didn’t, despite pumping day and night. Therefore, we continued to feed EBM and also top up with formula. Eventually, Austin was not latching at all so I continued to pump, even when I had damaged nipples, as I wanted him to have my breast milk so desperately.

Austin had bad reflux and struggled to gain weight, again this was discouraging as I felt I was failing our son. He started to gain weight well, despite the reflux. It was then advised from the paediatric team to put him on anti reflux milk, as by then he was on roughly two thirds formula and one third EBM via a bottle. The anti reflux milk made a massive difference but he would still throw up alot of the EBM feeds, so we stopped giving him EBM and we froze in bags. I stopped pumping at around the 4 month mark and have around 60 bags stored for when Austin needs it.

I am so proud to have got to the 4 month mark, and I know I didn’t fail our boy, I certainly tried through blood, sweat and tears!! I found the Connect and Share Facebook group to be a great source of encouragement. Although I found breastfeeding hard, it has been so fulfilling knowing that I have given our boy the best start in life.

Everyone’s journey is different and not always straight forward, be proud of your achievements no matter how small you think they are. You’ve got this!