First published on www.facebook.com/breastfeedingtogether on 28/04/19 as part of the sharing sunday series. 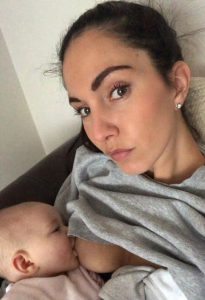 I always knew I’d like to breastfeed. My mum had breastfed me, and I just knew it that it was what I wanted to do. I was adamant that if for any reason breastfeeding didn’t work out for us, I’d be happy that I’d tried and I would give her formula instead. However, I largely underestimated my own determination (and maybe stubbornness).

Unfortunately, I had to be induced at 39 weeks due to excess fluid around Jasmine. My labour was long and intense, and by the time she was born I had been pushing for two full hours, and awake for almost 48 hours. To say I was exhausted would be an understatement! But she latched on perfectly within 20 minutes of being born and fed for forty minutes. I was over the moon and the rush of hormones and love were something I couldn’t even describe.

She was feeding so well that the midwives let me home on the same day, with me promising to bring her back in if we experienced any problems. Which we didn’t. She fed every two-four hours and all was going perfectly (with many hormonal tears, snacks and lots of lanolin cream!) At 5 days old, she had actually gained 2oz and now weighed 8lb7. I was extremely proud of myself! And convinced that we were both made for breastfeeding.

However, problems started to arise when Jasmine was around two weeks old. She was either asleep or crying, she was never ever content. People told me this was normal and as a first time mum I ignored my instincts and tried to push through. She then started with recurring oral thrush which she kept passing back to me. We were both in pain but continued to battle through. This finally cleared up at around 8 weeks old, but Jasmine was still very clearly uncomfortable.

At 8 weeks old, I began to notice mucous in her stools. I contacted my Health Visitor, and got her reviewed by the GP and the lactation consultant. Everybody told me that there was no problems as she was still gaining weight fine. However, two weeks later I also started noticing blood specks in the mucous. It was suggested that Jasmine could be allergic to dairy, and I could either start her on prescribed formula, or give up dairy and soya from my diet. Of course, I chose the latter.

For four months, I gave up all my favourite things in the hope that Jasmine would become more comfortable and her little bowel could heal. Dairy and soya seemed to be in absolutely everything – it wasn’t as simple as just giving up chocolate or cheese. Eating out was a nightmare – and I would feel indescribably guilty if she seemed to have a flair up. I would convince myself that I had accidentally eaten something to set it off.

This went on until she was six months old. Jasmine was still visibly uncomfortable, and still having mucous and blood in her nappies. I was at my wits end. This is when I saw an article about oversupply. I decided to do some more research on this, and realised how forceful my letdown was. I had never known this as obviously you don’t really have anything to compare to! I contacted the health visitor again who advised me to try blockfeeding, and the change was almost instant!! Jasmine was comfortable, content, smiley and her nappies were normal for the first time since she was a few weeks old!

Jasmine is now nearly 11months old, and we are still going strong. She’s such a happy girl now and is honestly a joy to be around. I am SO happy we persevered. We both love breastfeeding and I feel that we have an amazing bond due to this.

Thank you so much to breastfeeding together for all your help in the first 6 weeks, the weekly phone calls helped ensure I never felt alone. And I used online chat a few times when I was really worked up and worried when she was having her issues, which helped calm me down and kept me going without ever reaching to formula.