First published on www.facebook.com/breastfeedingtogether on 24/03/19 as part of the sharing Sunday Series. 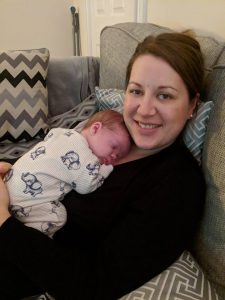 I am a new mum to Jack, who was born in January. To say that his birth was traumatic would be an understatement! I won’t go into detail, but I was induced, hyper-stimulated and had a very long labour which ended in forceps and an epidural.
I was in Recovery for over an hour and by this time Jack was struggling to latch on and getting hungry and quite stressed. The hospital breastfeeding lady to come and see us on the ward at Bolton hospital, but nothing that we tried worked. In the end we had to give him a bottle of ready-made formula. I have since found out that as soon as possible after birth your baby should be put skin-to-skin.

A day or two after we came home, Breastfeeding Together visited me, and Vicky then visited me every few days over the next 6 weeks.

With her support we tried everything you can possibly think of!

First of all she helped me to hand express and collect the colostrum in a syringe. We tried different positions, nipple shields, how to hold the breast/nipple, skin-to-skin, even something called “The Flipple” and trying a supplementary nursing system, but unfortunately it wasn’t effective for us! But still Jack wasn’t able to feed. I then bought an electric pump because I wanted to stimulate my supply, and thought if he could at least take the breast milk from a bottle he would be benefiting.

Expressing was not an enjoyable experience for me, I used the pump every 3-4 hours through the day and once through the night. I was only expressing a maximum of 15ml every time which wasn’t nearly enough to feed my son and therefore had to be supplemented with formula.

Vicky talked to me about the fact that because I hated it so much this will have had a negative affect on my oxytocin levels, and therefore my supply. So with her help I tried to change my mindset to a more positive one, and relax more whilst doing it, but it still didn’t increase my output. I also gave power pumping a go, breast massage, skin-to-skin, as well as taking Fenugreek tablets and brewers yeast but nothing seemed to make any difference!

I was still putting Jack to the breast every feed, before giving him a bottle. The problem was he was getting extremely frustrated that it wasn’t working! He would attempt for a couple of minutes and then absolutely scream. He had all the right instincts, but he just couldn’t create the correct seal. He would try, taking a couple of sucks, but then get annoyed and wrench his head back. This meant starting all over again. We also found that Jack would try harder if I was wearing nipple shields, but having had the bottle for a couple of weeks he found it really hard work, as breastfeeding was more effort for him.

Vicky mentioned going to a breastfeeding drop in group where we saw a lactation consultant who found that he had a very thick posterior tie, which was probably affecting his ability to latch! We were referred for this to be cut straight away but had to wait over 3 weeks for the appointment. After this there wasn’t really any improvements in Jacks feeding.

I made the decision to stop feeding, at the breast and expressing as it was making me stressed and I wasn’t enjoying it.

Now Jack is having donor breast milk plus formula. Lovely ladies from Human Milk 4 Human Babies have selflessly donated their milk so that my son can have the best start in life. If this is something you may want to do, definitely speak to Breastfeeding Together about it! I’m so pleased I did!

My journey has not been the traditional breastfeeding journey, and it has not been easy, but I think it’s important for new mummies to know that breastfeeding is not always the rosy perfect image that we imagine or see on social media. There is more than one path on this journey, and breastfeeding together will be there to support your whatever path your journey takes and what ever decisions you choose to make!