First published on www.facebook.com/breastfeedingtogether on 24/02/19 as part of the Sharing Sunday series. 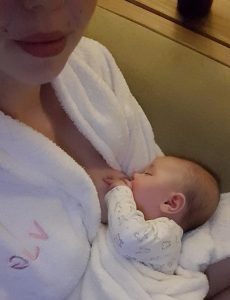 Breastfeeding has been the biggest rollercoaster of my life! Little Alfie and I started out fantastic, 2 weeks into our journey his latch slipped as he was not opening his mouth wide enough to feed properly. I became so cracked and sore, I almost threw in the towel. It was too painful to feed so I opted to use nipple shields but he wasn’t gaining weight. I then decided to exclusively express and luckily he took to the bottle straight away! Eventually Alfie was checked for tongue tie and this was the prime cause, it was cut and we were able to return to breastfeeding. It took me a while to heal but it all worked out perfectly in the end. He is coming up to 7 months now and breastfeeding is the best parts of my day! Any problems i’ve had in the meantime (such as a nursing strike after his injections) I’ve reached out on the Facebook page and have been supported ongoing.

I would have quit after 2 weeks if I didn’t get the help and support from the ladies at Breastfeeding Together. Several ladies visited me at my home as early as the next day of me needing someone! They also rang to check up on me and kept in touch on Facebook. I owe my journey to you. Thank-you so much!